The Leo D. Mahoney Arena is the new on-campus arena at Fairfield University. The quick review is as follows: Leo D. is great.

Is it perfect? No, but the issues are minor and do not take away from enjoying a fine two hours of basketball. However, before we get into it let’s enjoy some steamed hams.

A week before the game I was down in Connecticut with a friend and knew we had to stop at Ted’s in Meriden. Traveling south to Fairfield, it’s about 40 minutes north of campus but only a brief five-minute detour off Route 91. 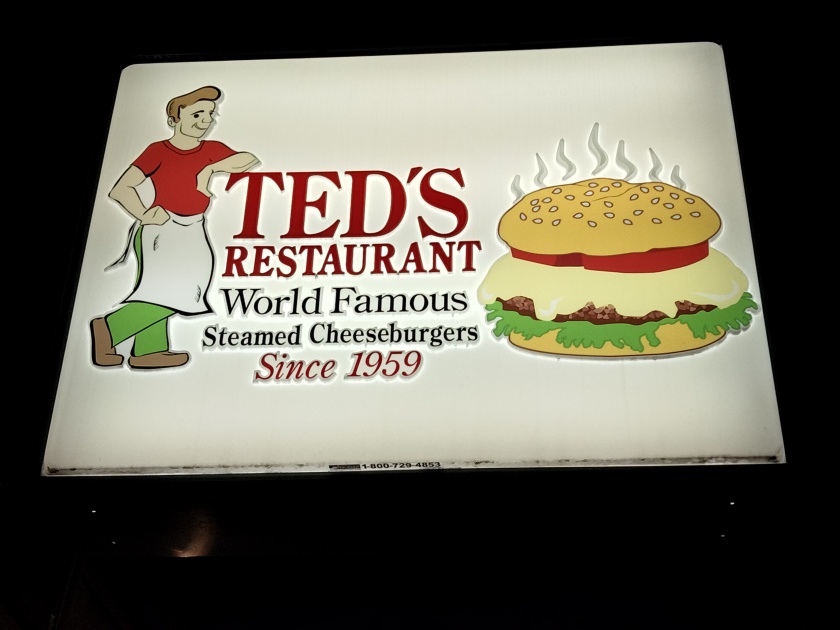 And yes, you’re reading that right: the burgers are steamed. There’s nary a grill in sight when you walk into this incredibly tight and cozy eatery. 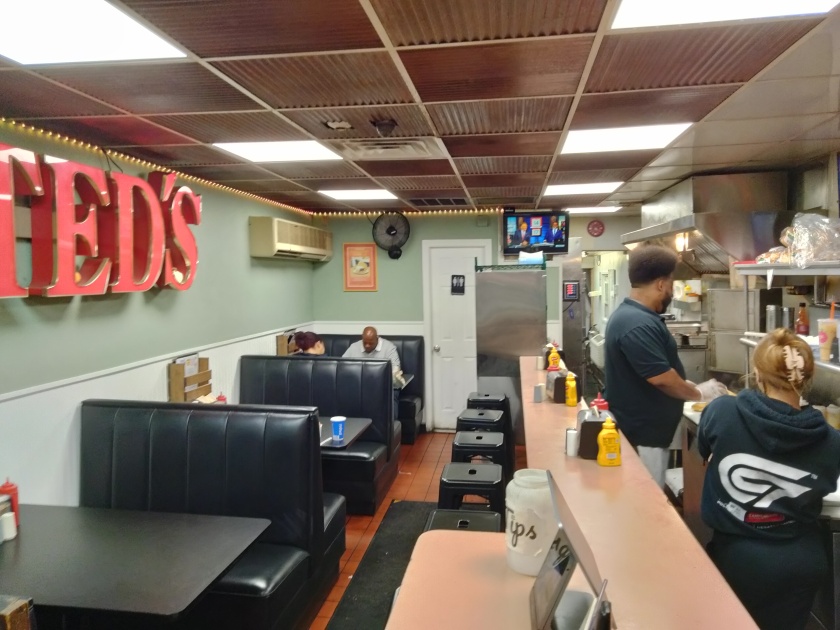 The custom steamer boxes sit stacked behind the counter. The burgers and cheese are both steamed. Each burger and hunk of cheese sits in its own little tray and steams away. 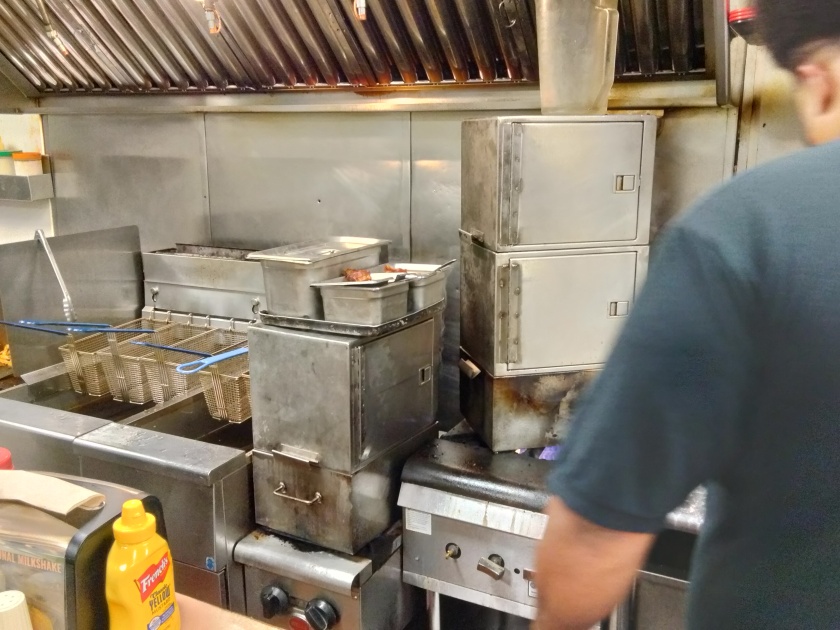 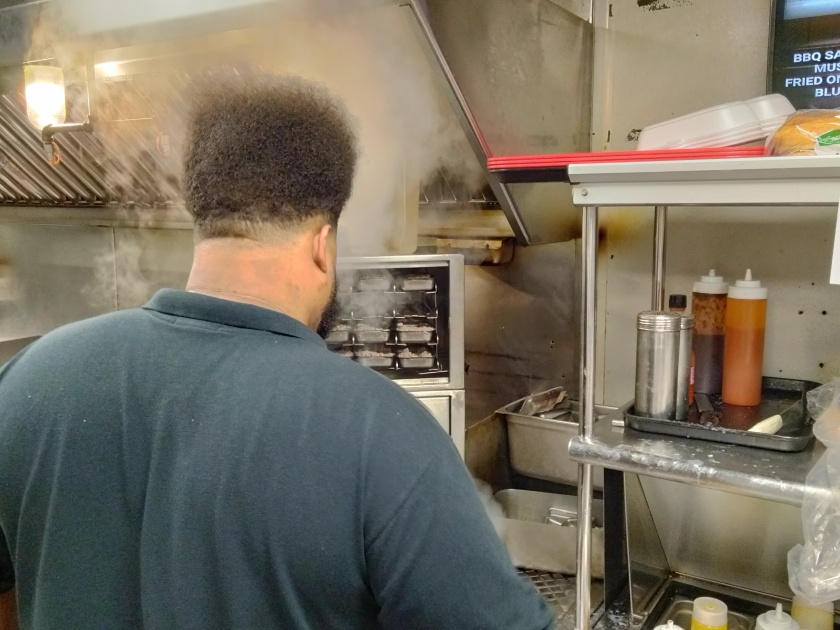 Jay, the cook, held it down and was a real one. It’s a neighborhood spot at its core and has the familiar feeling even for someone like me who had only been there once before way back in 2008.

As Jay said, the burgers are just big enough to make you think you want a second but having two is too much. You can get them With all sorts of toppings, and the fries complement the beef perfectly. 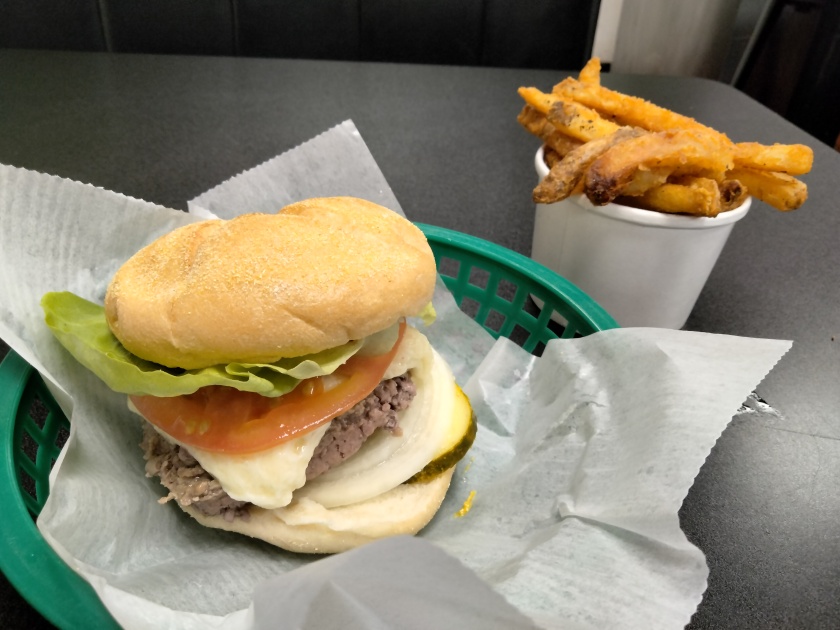 The steamed cheeseburger is a regional quirk that doesn’t exist outside of a small stretch of Route 91 in south-central Connecticut. I can’t recommend this more highly if you’re passing through. Hell, make a trip out of it.

The Leo D. Mahoney Arena was built to replace Fairfield’s old Alumni Hall. It sits right in the heart of the campus, which is just a mile off Route 95 in southwest Connecticut.

For years the men’s team played games at Total Mortgage Arena, a 10,000-seat arena in Bridgeport, six miles off campus.

This was just the second game in the building’s history after having been opened just two days prior with a women’s win over Stonehill.

The exterior is beautiful and feels right at home on campus, and it’ll look even better in the future when the landscaping around the plaza fills in. 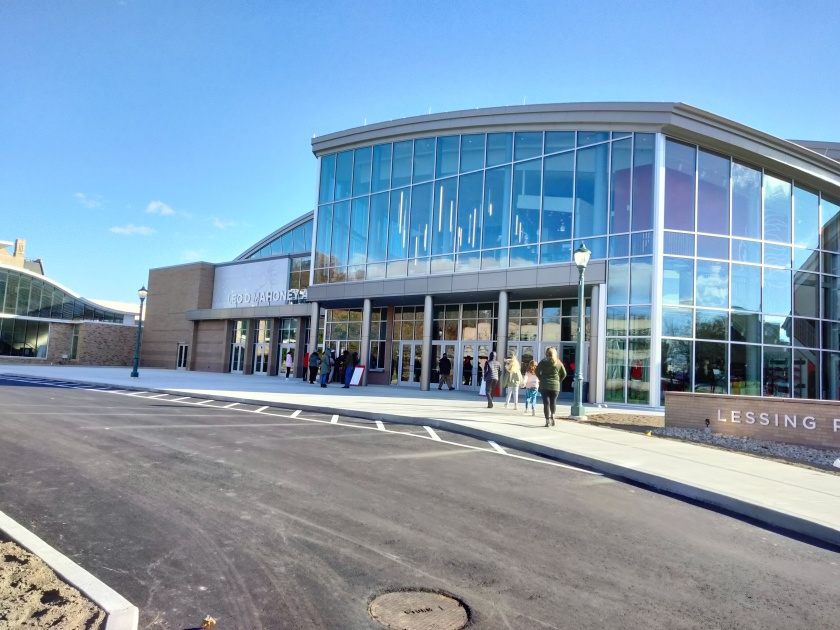 After walking through the main doors you are immediately on the main concourse overlooking the floor. Everything has an industrial look without feeling cavernous, which I like. You can see the pipes and the underside of the balcony. 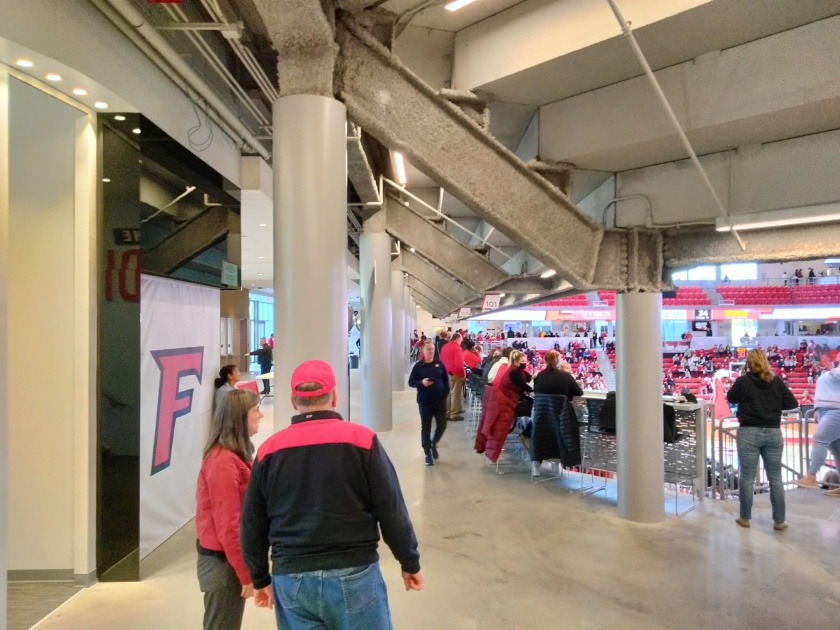 There’s ample room to walk around, and you have a 360-view of the court no matter where you are in the building. It’s so damn open. You’re always in the action unlike most other arenas of this caliber where going to get a soda means actively separating yourself from the playing area.

And hey, speaking of soda, let’s see the concessions. 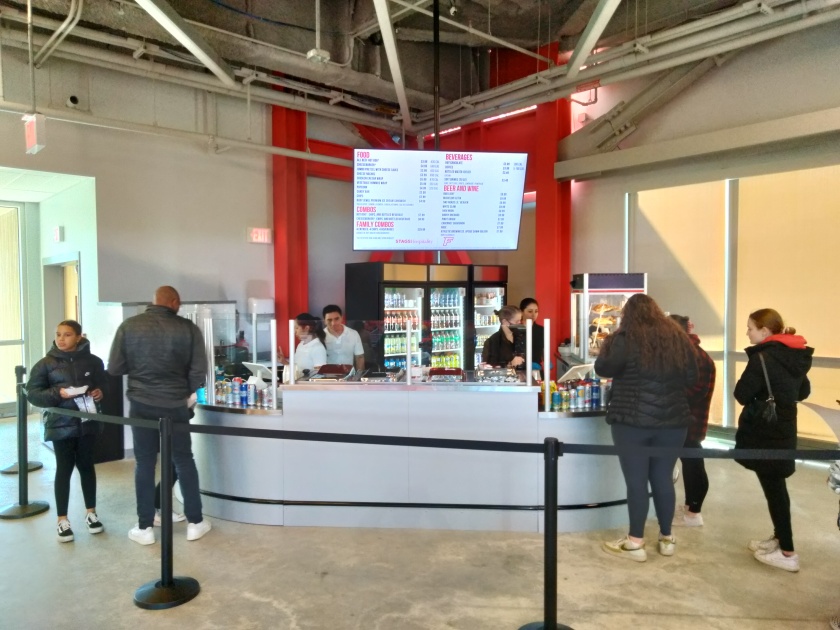 The stands are easy in, easy out. There are three: one in two of the corners on the main level and one on the balcony. They sell a variety of sandwiches, standard arena fair like chips and soda, candy, and even a few bottled alcohol options.

The prices seem pretty fair and standard as far as arena food goes. There was no room for media/staff with a pregame meal, but I did get a voucher for a freebie at the stand and got to try it out.

I went with a chicken caesar wrap with chips and a water, and I added a candy bar.

The sandwich was quite good. For a prepacked meal I figured it would be airport quality, but it was significantly better than that. And those chips, man do I love me a good kettle-cooked chip. I will always hype a place that invests in quality chips like Deep River instead of going with the salty sandpaper that Lays makes.

There are displays at one end showcasing the history of Fairfield basketball and old Alumni Hall.

“The idea of either renovating or replacing Alumni Hall, which has its own history, has been talked about for a long time,” Fairfield athletic director Paul Schlickmann said after the game. “When I arrived they had conceptual plans, and then we just kind of kicked it into high gear not just from a planning and design perspective but from a fundraising perspective.”

Leo D. was built at a cost of $51.5 million and was almost exclusively donor funded, a point of pride for Schlickmann.

One of the things I like most about the building is how much natural light it has. Modern arenas don’t have that, so to see the room splashed all over with natural light was a delight. 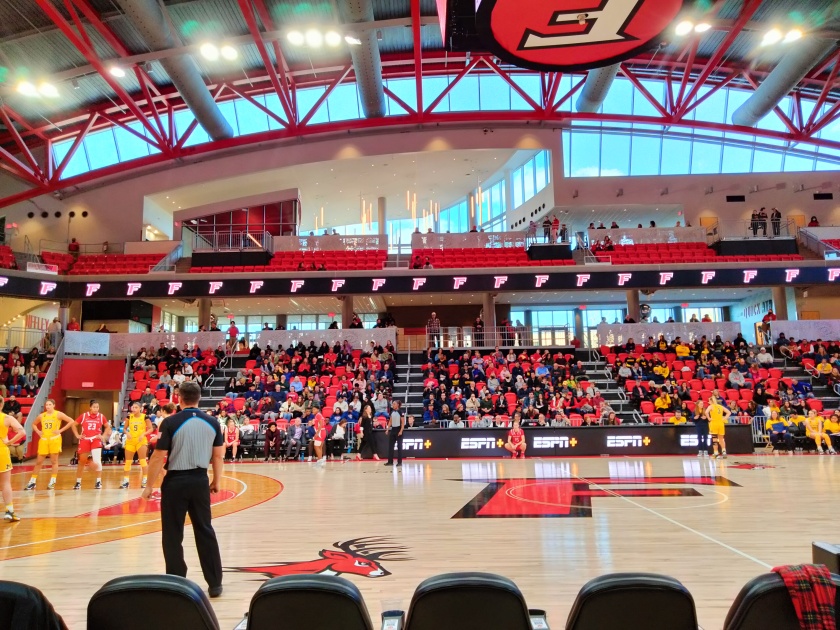 With an abundance of natural light, the building feels much bigger in the afternoon and will feel different for night games. It’s two different types of home-court advantage for the Stags.

“Centerbrook Architects was the architect for us. We and they were very big on the glass aspect of it,” Schlickmann said. “It’s just such value added to not just the [exterior] aesthetics of it but inside as well.”

Underneath the seating bowl are the locker rooms and offices galore. No stone was left unturned. The room for watching film is luxurious. 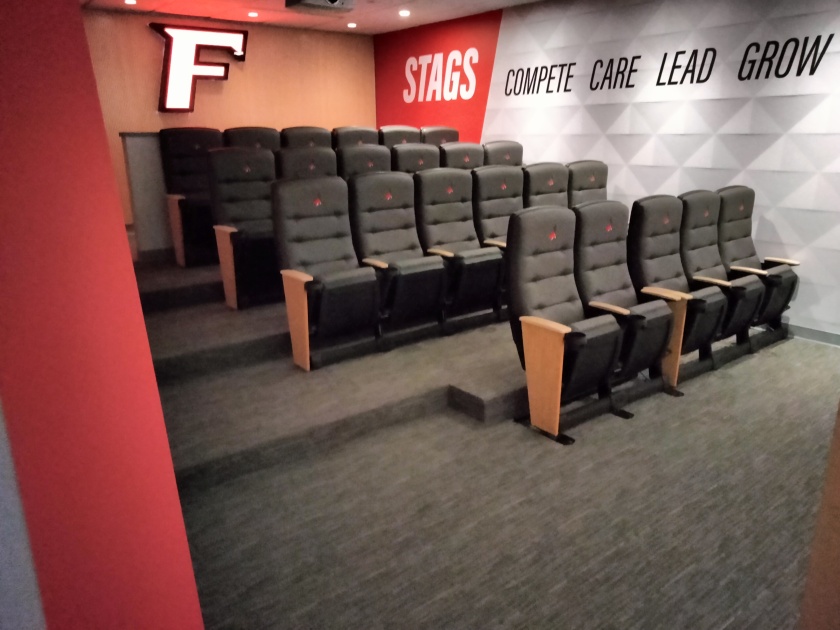 There is a small team shop just off to the right side of the entry area. Small, yes, but certainly full of a variety of Fairfield merch.

The center-hung video board is a good one and sized perfectly to the building. 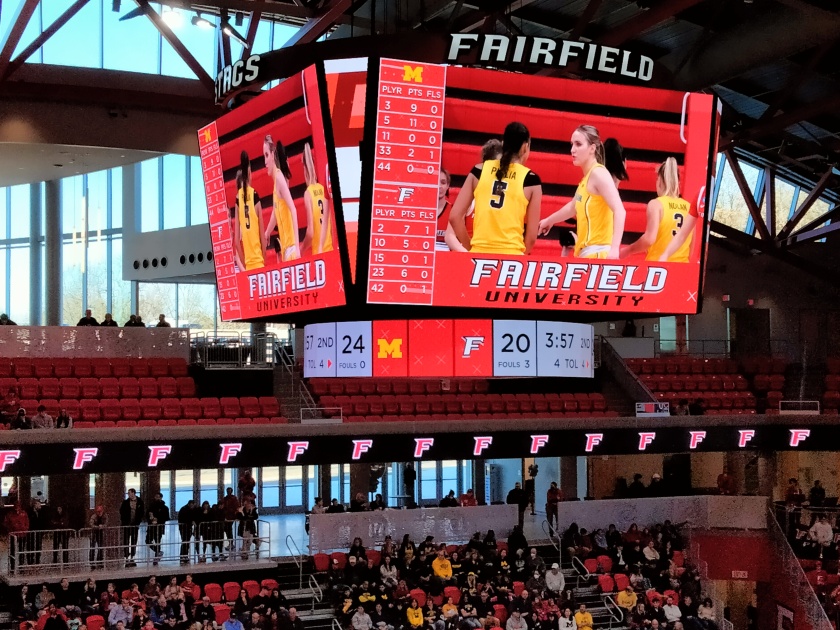 The game production studio is in a room right on the main concourse so you can get a live look at how the game and in-arena entertainment is produced, a true rarity in D1 athletics.

And Lucas the Stag is a cool dude.

I did have two critiques of the building, one bigger than the other.

The smaller one is the cup holders in the front row of the balcony. Every seat in the balcony has a cup holder, which is good. The back rows have a holder discretely placed behind the chairback in front of them.

The cupholders in the front row though are on the arms of the seat. This narrows the seat slightly and can be a bit abrasive if you reset your position in the seat. Again, a very minor issue.

The second is more specific and something a bit bigger. There’s almost no space for working media. There was one table tucked between two railings that sat four people and was packed with student writers from the Michigan Daily.

My seat was at the drink rail that surrounds most of the court at the top of the main level just a few feet away from the main media table.

The rails are comfortable, which is great, but I was just sitting there out with the crowd. It wasn’t a problem on this day because this blog is different from traditional reporting, and I was roaming around. But if I was with the Hartford Courant or Connecticut Post or New London Day, and that table is full, what do I do?

Do I just leave my laptop and notes right there where someone who gets a bit too tipsy can easily grab? Where do I plug in my laptop to charge so I can make deadline? There was a media workroom underneath the main arena and it was also quite small.

I hope there’s a plan for when Fairfield hosts a big game or a conference final because otherwise it could become a real problem for the people there covering the game.

Overall, Leo D. rocks. I really can’t say enough nice things about this building. So much thought and care went into the planning and execution, and you see it from the moment you enter the room.

I’ve said for a long time that the best 21st-century arena in New England is the Ryan Center at my alma mater, URI. Leo D. might surpass it or at least make it a 1A, 1B situation. The teams and students at Fairfield are incredibly lucky to call this place home.

The Stags welcomed the nationally-ranked Wolverines to town in a showcase game, and the hosts came out of the gate hot.

Fairfield didn’t crumble under the moment and led early. Of course, Michigan leaned on their experience to weather the early storm and ended the first with a flourish thanks to Laila Phelia.

That put the Wolverines up five after the first 10 minutes. The Stags kept it close though and wouldn’t let Michigan put their foot down.

This triple from Izabela Nicoletti Leite cut the deficit to two.

Phelia and the Wolverines, though, had answers and plenty of them. She would finish with 17 points.

Michigan pushed the lead back to six in the final minutes of the second quarter and then the Stags came alive.

That three from Lauren Beach made it a one-point game and had the home crowd rocking.

And then the floor fell out.

This bucket from Emily Kiser put Michigan up five.

The Wolverines went into halftime up 34-25. The third quarter was all about quashing any possibility of an upset on a cold Connecticut afternoon.

By the time the third quarter ended it was a 16-point lead for the Wolverines. Fittingly, it was Emily Kiser who put a bow on this one with a textbook layup.

One of the best moments when I was a kid was getting to go onto the field and play games between innings or on the court or rink during a timeout in the game.

I remember being a kid at UMass-Lowell hockey when I was 11 or 12 on the ice cleaning up the foam pucks from the chuck-a-puck promotion in the second intermission. I thought it would be fun to throw the pucks back into the crowd. I was removed from the ice by the assistant athletic director and the crowd booed in support of me. Was a formative experience.

Sure, it’s silly but it meant something. And I hope for the two young girls who got to play the game at the break after the third quarter it’ll be something to remember for years to come. Sports are supposed to be fun, and this left me with a big smile.

Thanks for reading. Go see a game at Leo D. Here’s one for the road.