“You know. Like Caine in Kung Fu. Walk from place to place. Meet people. Get in adventures.”

This is not, nor has this ever really been, a basketball blog. Sure, basketball is the glue that binds it all, but this is a blog dedicated to the fact that there is weird shit everywhere.

I really dislike this ideal pushed on young people in America that in order to have fully lived a life you must “find yourself” somewhere. Inevitably, that “somewhere” involves a flight or two. The destination always changes but the desired end goal is always the same: level up in a way you cannot do at home.

I’d rather stay home and learn where I live. New England isn’t all that big, but boy is there a lot of weird in these six small states. Wherever you are there will always be some weird nearby. Go find it.

Today I found myself in a charmingly named city of frogs. Can’t get much weirder than that.

Willimantic. What a lovely word to say. Located on the historic land of the Mohegans, Willimantic’s name comes from Algonquian meaning either “land of the swift running water” or “place near the evergreen swamp.”

It is currently a part of the town of Windham in northeast Connecticut, and it’s a town that’s got bridges.

The Willimantic Footbridge just looks cool. I’m a sucker for riveted iron bridges and this looks the part. Six-hundred feet long, and built in 1906, it’s the only footbridge in New England that spans both a river… 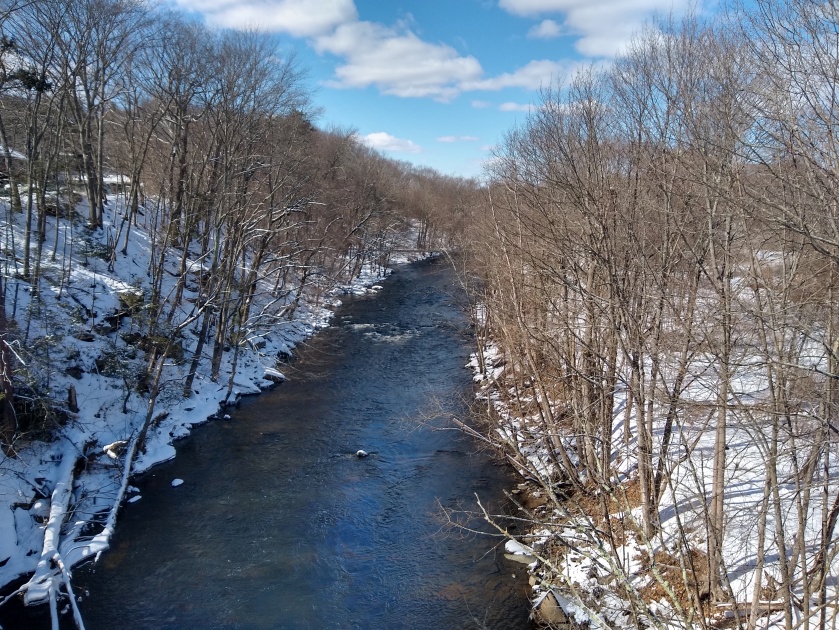 But about those frogs. The frogs are a symbol of the city and are immortalized in statues around the town. The main road bridge over the river features two copper frogs at each end of the bridge.

The frogs sit atop spools of thread, a nod to the town’s long textile history. But the frog story is far stranger.

The tale goes that in 1754 the townsfolk of Willimantic were tense and on edge as the French and Indian War had just begun. The people were expecting an attack in the near future.

That year there had been a drought and there was little water left for the frogs in nearby Follett Pond. The frogs began attacking each other, and the noise was so great that the townspeople thought they themselves were under attack and took up arms and all sorts of commotion was made.

There were cries of armageddon. There were people running with guns in the streets. Riders on horseback crested the hill ready for the fight. Nothing.

The next day the town awoke to find hundreds of dead frogs in the pond. The town was ridiculed throughout the colonies and the town seal was made to be a bullfrog.

Today, the apocryphal story is a beloved part of the town folklore and the pond has been renamed Frog Pond.

Connecticut food culture is everything New Jersey puffs its chest about, but without brashness. The Nutmeg state lets the pizza and burgers and diners and everything else stand on its own and stand out from the field without a need to tell everyone about it.

And when it comes to diners, Blondie’s is one of the best. 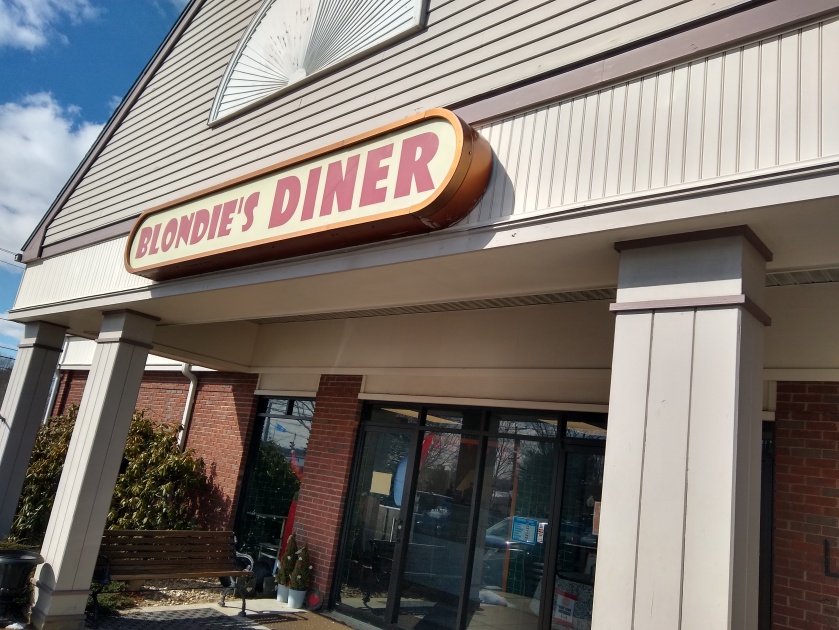 Located about five minutes from campus, it was a quintessential diner and it was a busy Saturday morning on this day.

One of my problems with diners is that sometimes the portions are insanity. I’m a big dude, and sometimes it’s just too much. I want to be able to clean a plate and not feel like death 20 minutes later.

Blondie’s balanced the line perfectly. I got a deluxe breakfast (not sure the name on the menu but that’s what I’m calling it) of a chocolate-chip pancake, eggs, sausage, toast, and home fries. 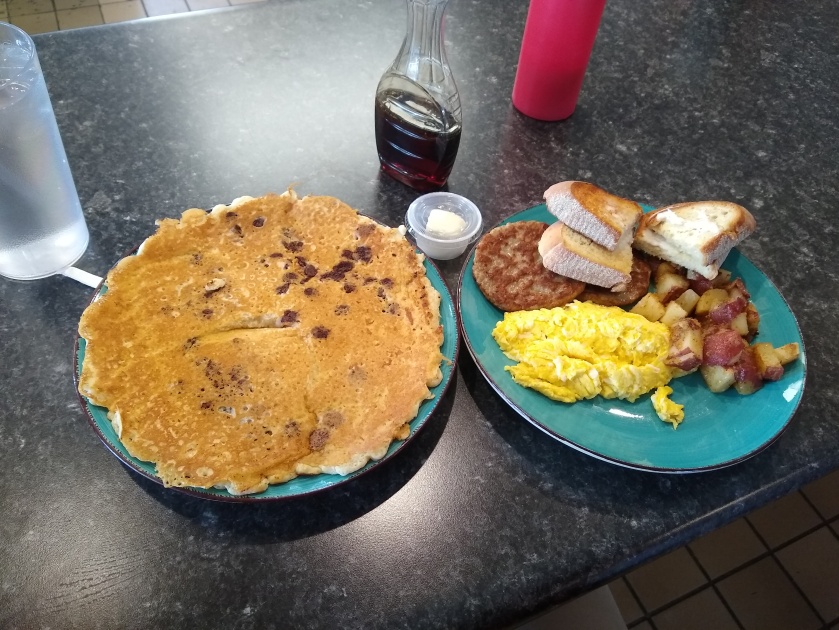 This is what a diner breakfast is supposed to be. They also had sausage patties, the supreme version of breakfast sausage, which was a nice addition to the plate.

Go to Blondie’s. Eat some food. it’s a good time.

Eastern Connecticut State was founded in 1889. It grew from being a normal school and teacher’s college into a university, a status it gained in 1983.

Today, the campus is broken into the sections, North, South, and the sports complex which is about two miles from the bulk of the main campus.

After the game I got to take a walk around North Campus and she was a looker.

On the side of the science building was Windframe, a kinetic sculpture by Tim Prentice that came alive in the wind.

Geissler Gymnasium sits on the second floor of the Sports Center, which sits a short walk from the library. 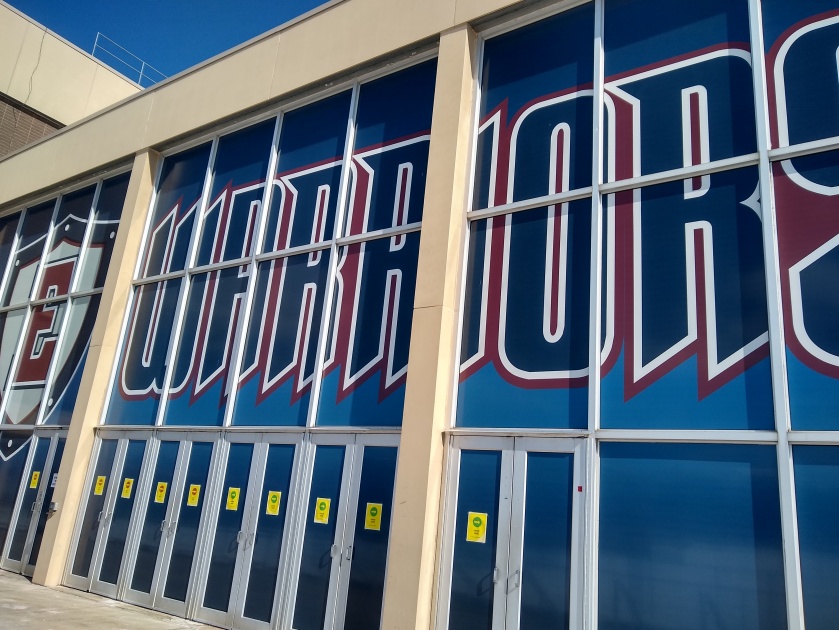 The first thing you notice when you get to the second floor is the lobby area. It’s massive. It’s well-lit, and it feels like a Division 1 space in every way.

Geissler Gym sits about 2,000 people when full and is exactly what you think of when you think of a D3 gym. It smells of lacquered wood. The bleachers creak with every step. It’s warm even in the dead winter.

As you can see, the bleachers were only partially open to allow for the webcasting team to have some space and for the broadcasters to be able to get up top to work.

It also gave me the chance to dangle my feet off the edge of the bleachers while watching the game. I’m not sure I’ll ever be able to do that again.

Today the Warriors were hosting the UMass-Dartmouth Corsairs. Even without a crowd, the pregame had a good vibe to it.

Early on the game was fast and fun. The teams traded buckets and UMass-Dartmouth went into the under-12 media timeout up 19-18.

It was college basketball in its purest form. There was no PA announcer. No national anthem. No lineups. No one to read the scorers and the fouls. It was just the game.

During the manic opening I turned on the camera and just wanted to capture some of the game’s flow. What I got was more than two minutes of serenity. Enjoy.

While the beginning was electric, eventually the Corsairs took over.The lead kept growing throughout the half. By the time intermission rolled around, UMD was up 11 points and firmly in control of the game.

And the lead just kept getting bigger. With nine minutes left, the Corsairs had opened it up to 21 points and were taking the game for a walk.

The Warriors were able to close it down a little, but this nifty layup by Adam Seablom but UMD up 14 with 6:30 to go.

And it’s at this point in time that we meet the protagonist of this story, AJ Edwards.

Edwards, a freshman from New Haven, left high school as his program’s all-time leading scorer. However, this afternoon, 30 minutes into the game, he had yet to crack the egg next to his number on the scoreboard.

And then AJ Edwards took the rock and turned the game into his own personal mountain to conquer.

Edwards scored 15 points in the final seven minutes of the second half. And every time he touched the ball he kept escalating.

He even found a way to crossover out of a steal. One of the coolest things I’ve ever seen in college basketball.

And on the back of Edwards, the Warriors chipped away at the lead. It shrank and shrank some more until a pair of free throws from Edwards put Eastern up a bucket with 19 seconds left.

But UMD did have a shot, and this was the top team in the conference.

Overtime it was, tied at 77. And like in regulation, the Corsairs sprinted ahead, leading by four just over two minutes into overtime.

But only one team had AJ Edwards.

But even Edwards couldn’t get the Warriors to turn the corner. The Warriors trailed by four inside the final minute of overtime and were down 85-83 with 40 seconds left.

And then this happened.

AJ Edwards finds Max Lee for the game-winning three. It was Lee’s only points of the game.

This is all I ever want from sports. For a few fleeting minutes on a Saturday afternoon nothing else mattered. It was just AJ Edwards, an orange ball, and the entirety of the universe on a hardwood floor.

Four days after beating UMD, the Warriors hosted Keene State. It was another back and forth affair won by Eastern 85-83 in overtime. AJ Edwards hit the game-tying three at the end of regulation. He finished with 24 points.