My feet are in the Saint John River and I’m staring at New Brunswick. This is where The Hoops Project begins.

Fort Kent, Maine. You’ve never been there. Until right now, I’d bet money that you didn’t know it even existed. More north than Quebec City, the cherry on top of the Eastern Seaboard, Fort Kent feels like the edge.

To get there, you drive up Route 95, peel off onto Maine Route 11 and go north until there’s no more America left.

And it is beautiful country. Even with the leaves off the trees, the natural wonder knew no bounds throughout Aroostook County. 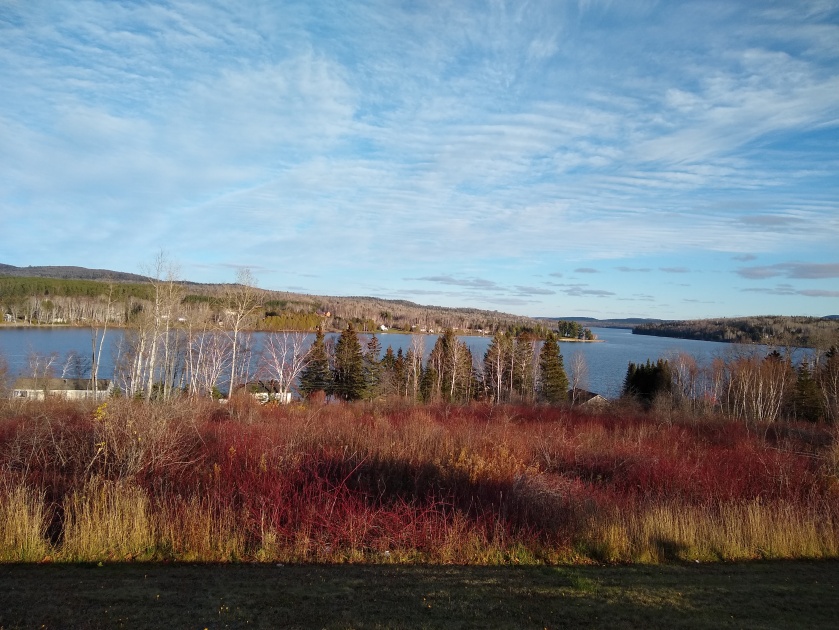 From Bangor it was a 3:10 drive to downtown Fort Kent. The drive is one for thinking. You drive through tiny hamlets that would be forgotten if not for the census and pass by family burial plots with headstones that date back centuries.

Quick aside: Aroostook County is massive. It’s larger than Connecticut and Rhode Island combined. Maine is bigger than South Carolina in terms of area. That just feels wrong, but it’s correct.

There are signs reminding you of your fragility the deeper you get into the woods. The signs remind you that the roads may be made for man, but we’re no match for a pissed off moose.

But it is gorgeous and serene. Please take a ride with me for the final 10 miles to campus.

Fort Kent is small. With a population just a shade higher than 4,000, there’s only a single stoplight in downtown, at a T-intersection by the Citgo.

Located in the heart of French Acadia, the Acadian flag flies at the same height as the American and Canadian flags at the border crossing. The Acadian flag is identical to the French flag with the addition of a five-pointed gold star in the upper left corner.

There were several signs in storefronts downtown signifying that both English and French were spoken at the shop. A heavily Catholic town, the St. Louis Church shoots into the sky with its wrought-iron steeple piercing the clouds.

Fort Kent also has a neat historic site with the Blockhouse. Did you know that Canada (then a British protectorate) and the US almost went to war in the 1830s? The Aroostook War nearly turned bloody as the United States and the United Kingdom bickered about the Maine/New Brunswick border.

The Blockhouse is a two-story-high wooden fortification built as tensions grew between the two nations. In the end, thousands of troops and militiamen were mobilized but no shots were fired. The Webster-Ashburton Treaty ended hostilities in 1842.

Fort Kent may feel like the edge of the universe but the Subway and McDonald’s remind you that America it still is.

However, there are far better places in town to eat including Walker’s Pub and The Swamp Buck. At the latter I got a Caesar salad that ranked as one of my personal favorites in New England. Never thought to add red onions to a Caesar but they work wonders.

Aside from the delicious Caesar, the Swamp Buck is a down-home burger, steak, and sandwich spot that will satisfy.

And when in Acadia one must buy a box of ploye mix. A local delicacy, ployes are a tweener between a crepe and a pancake made from buckwheat flour.

Maine-Fort Kent is not an NCAA institution. It is a member of the United States Collegiate Athletic Association which is a national governing body for college sports at small colleges and community colleges. It actually allows schools to be dual members of the NAIA and NCAA Division III along with the USCAA.

Another quirk of Maine-Fort Kent is its schedule. The men’s team is slated to play 30 games this season. Only six will be at home.

With a roster that features three players each from Oregon and California, the Bengals have grown into one of the better programs in the USCAA despite the remote location. Oh, and they got a starter named Zeke.

Their home gym, simply called The Sports Center, is just that: a gym. With a capacity of around 1,400, it does the job.

It was an excellent game. Fort Kent’s opponent, Husson College, is a D3 school in Bangor, but it was all Bengals early. Fort Kent led by 14 at half and led by as many as 17 in the second half before the Eagles chipped away and had a chance to tie.

In the end, Fort Kent held for a 70-65 win, and if there was a box score online I’d have dropped some stats in right here.

Thanks for being stop one Fort Kent. Consider me a Bengals fan for life.

Up next: International Intercollegiate Shebangaroo