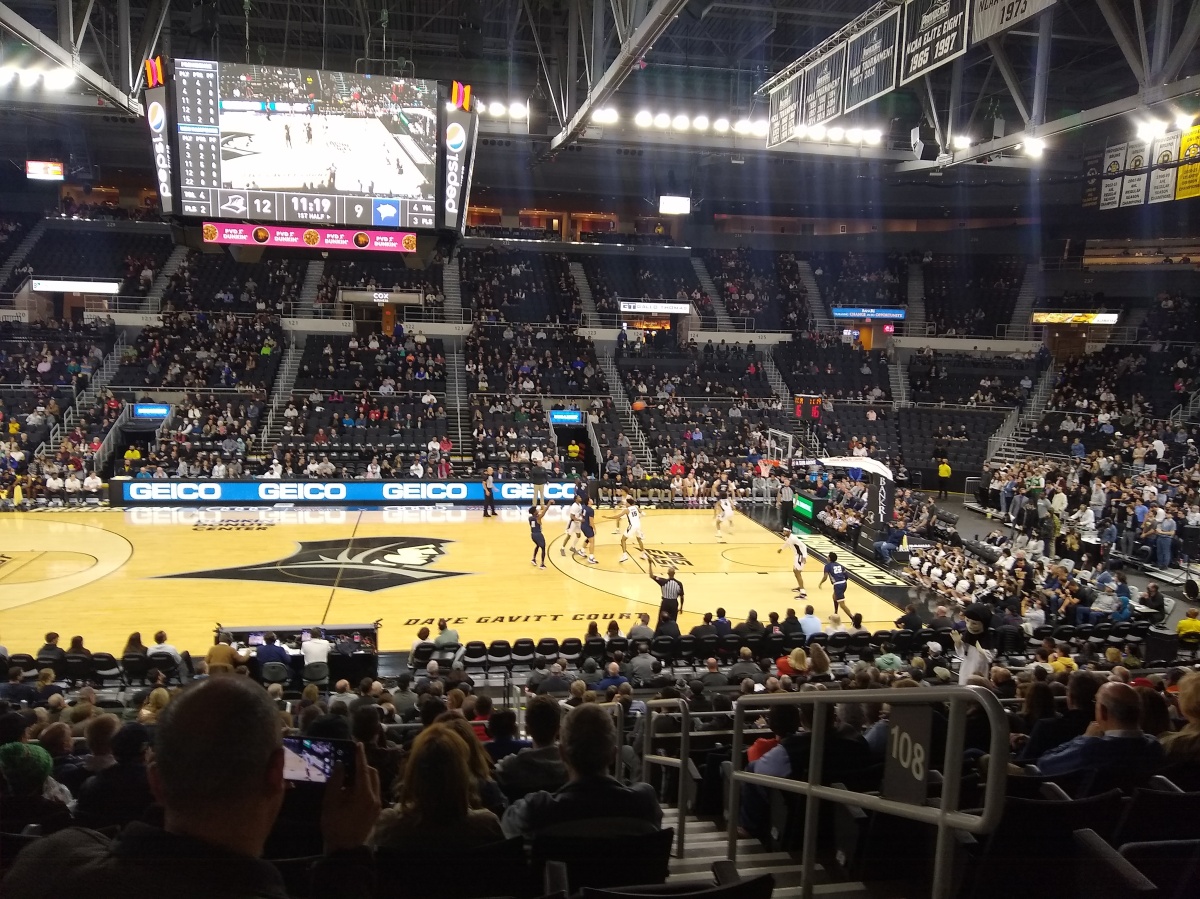 I love this TED Talk by Roman Mars about the importance of design and how we take good design for granted.

When a building is designed well we regularly miss the flow and rhythm of the structure. It’s so good and ingrained that we pass through without much care unless you know what to look for. A well-designed building can quietly be a piece of art.

But a poorly-designed building? Those fuckers will frustrate you from sun up to sundown. Any building that makes you sigh when you’re in it is a mood and a bad one at that.

When it comes to a basketball arena I find that there are a few key things that a building must achieve to be considered good.

1. Every seat must have a good vantage point of the court. No seat should make you ask “really, they charge money to sit here?”

2. Getting in and out of the arena must be easy and common sense. If getting to or from your car is disorienting then there’s a problem.

3. There needs to be a good sound system. If you can’t hear the announcements then the room needs to be smaller.

4. We all know that arena concessions are a con, but at least let me feel like I’m getting something of value and not standing in a glorified bread line.

Now what if I told you that second-largest college basketball venue in New England fails to check all of those boxes? Would be pretty wild, right?

But before seeing basketball I needed hot dogs. Excuse me, I mean hot weiners.

You can walk in and have a weiner in your hand within 10 seconds. And, in my opinion, you absolutely must order them all the way which entails a steamed weiner (made of a beef/veal/pork blend) in a steamed bun topped with mustard, meat sauce, raw onion, and celery salt.

Just look at these masterpieces.

My order when I go is the special, two all the way with fries, and a burger and diet coke. Considering it was 5:30 and I hadn’t eaten all day it may as well have been the best meal of my life. 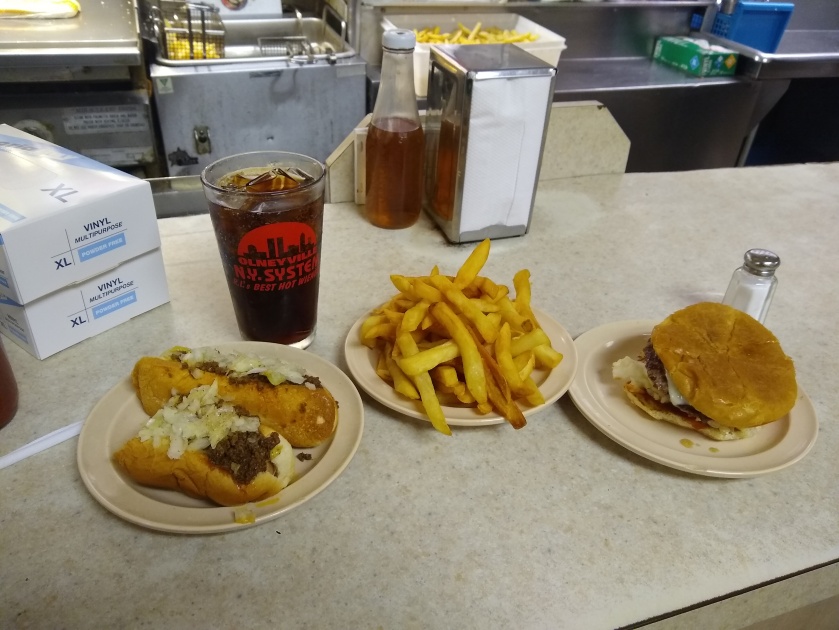 And the building is small. You can practically reach over the counter and cook the food yourself. It’s one of the few places where I always find myself in conversations with people whose names I’ll never know. It’s convivial. Familiar. 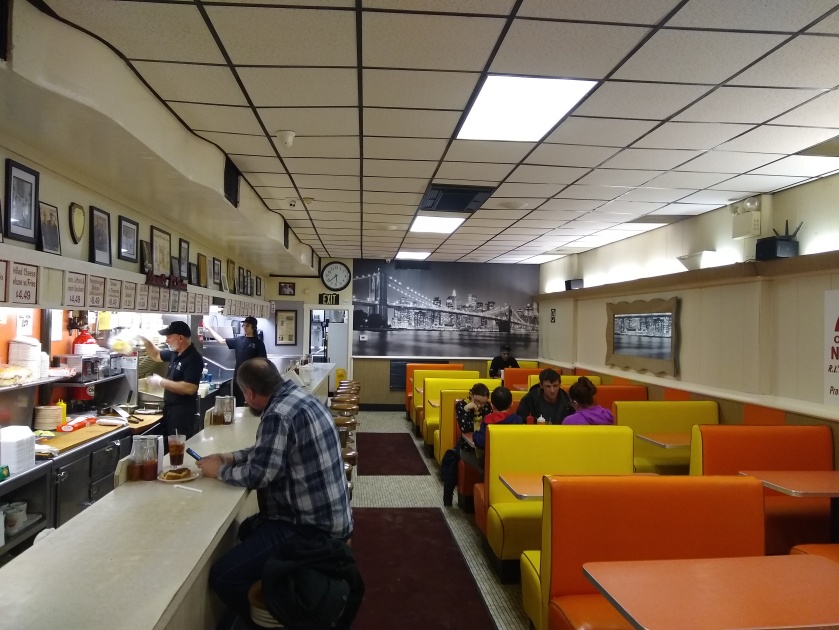 I’ve eaten at some relatively high-end places on my travels. None of them hold a candle to this. If you’re in Rhode Island or traveling through on 95, hop off and eat here. It’s going since the 40s for a reason.

Getting to the Arena

That’s a new section heading and you’ll never see it again. It’s necessary here because to get to the Dunkin Donuts Center is a herculean feat in its own right.

Situated in the heart of downtown Providence, the best place to park for a game at the Dunk is the parking garage of the Providence Place Mall which has thousands of spots and is only $2. Are there places closer? Yes. But there is no lot cheaper and, more importantly, larger than the one at Providence Place.

Now, parking in a garage to go to a game in a city is a regular occurence. I’ve done it in Boston and Hartford and Worcester and Manchester. However, all of those have one thing in common: you park, leave the garage, and take a short walk up the street to the building. Easy.

But not here. No. That would be too easy. What you can watch below is my eight-minute journey from my car to the Dunk. I promise, it is unlike anything you’ve seen before.

Why is the mall fully carpeted? Who signed off on that? Who is the sparkling thoughtmaker that decided to fully carpet a mall that is more than a million square feet?

The Dunkin Donuts Center is big. It can hold 13,000 people for basketball and, when the opponent is a big enough name, Providence fans will pack it.

However, when the opponent doesn’t pass muster, the Dunk can be a sparse house.

The arena also hosts the AHL’s Providence Bruins and events as diverse as pro wrestling and the circus to concerts of all types. And as a multi-purpose arena it just doesn’t really fit anything well. It’s made even more striking because the best college basketball arena in New England is also in Rhode Island.

But being hemmed in by the mall on one side, Route 95 on another, and the heart of downtown on another created an oddly-shaped building that is bad for basketball.

Here’s the view from one of the top rows of the building. Notice how half the jumbotron is blocked by the banners because the roof is so low. The sound system is akin to the teacher from Charlie Brown at those heights.

Now here’s the view from a seat on the floor. This is a real seat that could be yours for $525 for the season. 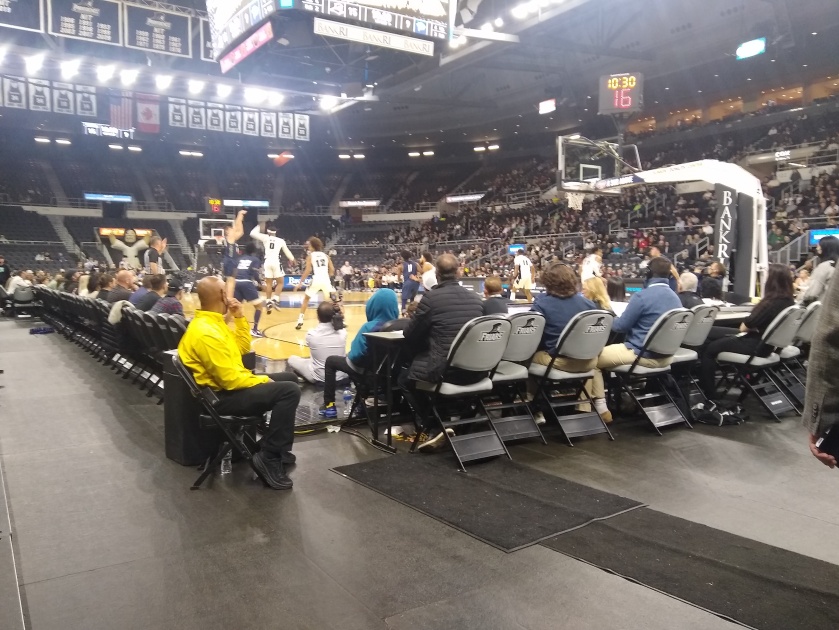 What a lovely view with a whole side of the court blocked and the endline blocked by a table of media people. To sell this ticket, in my opinion, is the equivalent of theft. At least the seat at the top of the building is a victim of poor arena design. This one is insulting.

The only plus to this seat is that you’re right next to the Providence band, and it’s one of the best in New England.

Underneath feels like a dirge. Even with an $80 million dollar upgrade/renovation in 2005, the Dunk is blah. I’ve been here when it’s at capacity. It’s almost unsafe trying to get through the halls. But at least you can get a tallboy for $10.

And the greatest ignominy of all was the Dunkin Donuts in the arena wasn’t even open. 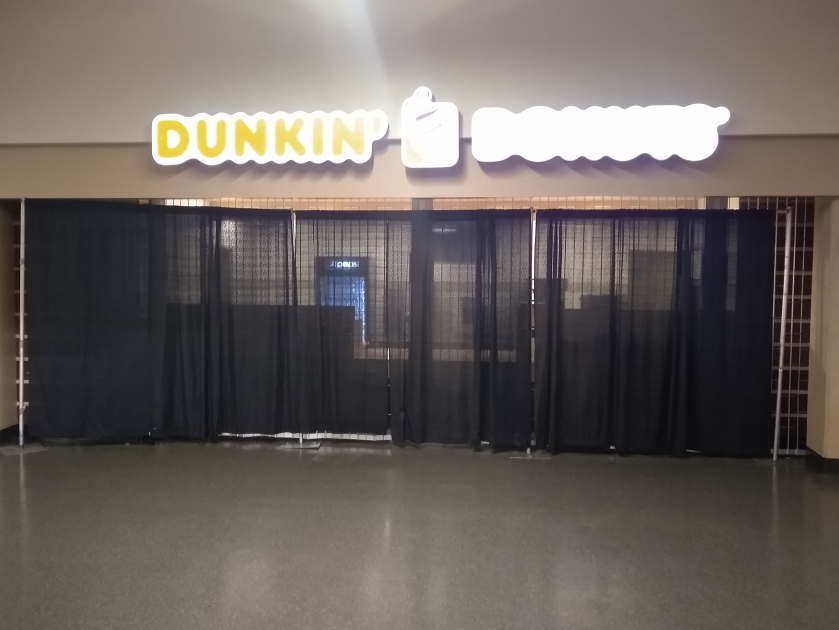 On paper it was a pretty straightforward game between a high-major team and a local one-bid opponent. Thing is, despite having a marked size disadvantage, UNH came to win.

The Friars jumped to a 20-9 lead. Rather than fold up, the Wildcats chipped away through the rest of the first half to get back within range. This three by Qon Murphy cut the gap to three.

It became tennis toward the end of the first half as both teams kept answering the other.

Nate Watson was a big ole problem for the Friars. The grad student was a nightmare for UNH to defend on the inside and made sure to keep the Wildcats at bay on the defensive end.

Even getting switched over to a Qon Murphy, Watson still gets back to get the swat.

Murphy would finish with a team-high 15 points for UNH off the bench.

UNH got to taste the spoils of adjusting and bouncing back early in the second half when they took the lead. With 16 minutes left UNH took a 40-39 lead.

Providence quickly retook the lead and blew it up to a dozen, but UNH kept chipping back and staying in it. Nick Guadarrama floated this one in, and he finished with 13 points.

But I did say earlier that Providence did have a size advantage and it showed down the stretch. The Friars finished +14 in rebounds and pulled away late.

Nate Horchler finished with a double-double of 10 points an 12 rebounds. All of his points came in the second half, and he had the honors of dropping the dagger.

With about a minute left in the game the refs called a jump ball on a tie-up. The fans behind me were incensed with the call and loudly rode the officials for nearly a minute about how horrible the call was. Providence had the arrow.

Maybe they were traumatized by the mascot.

Anyway, that’s the Dunk. Let’s meet somewhere else next time. Here’s one for the road.